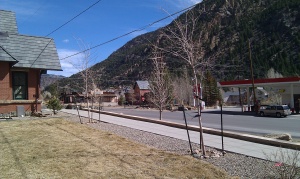 The View From The Rest Stop in Georgetown, CO 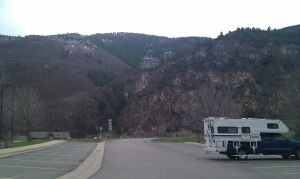 The No Name Rest Stop in Glenwood Canyon

Right by the side of the road we saw a half-dozen Big Horn Sheep! What a treat! After Green River, UT, we got onto Route 6 which took us into the mountains on less than Interstate quality roads. The sky got dark and then started to snow as we climbed into mountains that went on forever. For a while I was afraid that I had been caught in a three-dimensional M C Escher experiment on a road that went up and up forever. The windshield froze! I thought it was dirt and the windshield washer fluid didn’t spray up far enough to reach it. Then I thought to try the defroster and it cleared. The last part of the trip to the campground in Provo was to be on Interstate 15. I 15 is under construction before and after Provo! The exit for the campground was poorly marked for an outsider so I went the wrong way. Wrong! There was no way back. I ended back on the freeway for three miles. I was able to find the campground from back roads, which helped me in the morning.
Day 31: Sunday: Provo, UT to Lakeview, OR: George tried to put me back on the freeway to Salt Lake City but he does not know anything about construction-caused road closures. He wanted me to take Center Street to I15 and then turn left. But Center Street is closed under I15! Remember how I screwed up last night and had to use back roads to get to the campground. I just retraced my steps and was back on the road. The sun was out and there were partly cloudy skies. There were a string of confusing signs along the freeway into Salt Lake City. They spoke of a 25 cent toll. It looked like it was only for the left lanes. I suspect it is to meter traffic on the express lanes and is collected by a transponder like my FASTRACK or EZpass. It indicated that High Occupancy Vehicles didn’t have to pay. I never did figure out how the system could tell if the vehicle was HOV or not. Have I mentioned that I don’t like traffic? Even on a Sunday morning there was too much traffic into Salt Lake City for my comfort but before long we were on I80 heading out of the city and past the Great Salt Lake. 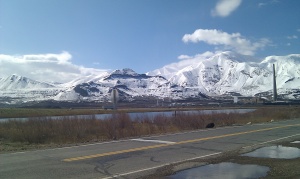 Mountains by The Great Salt Lake

It is the remnants of a truly Great lake. You still can see the lines where the shore was on the mountains around the lake. It must have been 100 miles across and a thousand feet deep. I remember one time in the eighties that the water level rose so much they thought they would have to close route I80 because it would be under water. 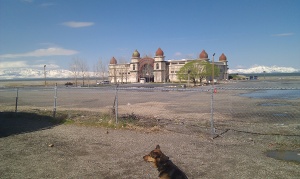 Lucy in Front of the Salt Lake Resort (Closed)

There were more “Wow!” times across Utah and in Nevada. The mountains had fresh snow. Just out of Salt Lake City I think I saw ski tracks coming down mountain sides that had no ski lifts. Could it have been helicopter skiing? I’ll never know. I wanted to have dinner in Winnemucca after I got gas but never saw any restaurant I would like to eat in so we pushed on, hoping to find food in Denio. Fat chance! I think Denio is too small to have a name. The road to Denio is absolutely straight for 30 miles then turns and then is straight for 11 miles and turns again and is straight for 16 miles. It is all very flat prairie with mountains on both sides. Neither Lucy nor I found it boring. She sleeps some of the trip but sits up a lot of the time and looks out the window appearing to be very interested in the scenery. From Denio the road rises into the mountains then drops off again. There were two places that signs said had 8 and 7 percent grades for 3 miles. One looked down onto a flat plain that was laced with streams looking like a jig Saw puzzle. On one of the up slopes after we were in Oregon I looked over to the left and saw a beautiful waterfall. Then there was the sunset! I looked up and saw a peach sunset with a dark blue spot in it under a baby blue arching sky. It only lasted a few seconds but I don’t remember ever seeing anything like it before. Seeing the old shore line of the Salt Lake and wondering what it must have been like and what it must have been like when it burst its dam and drained and seeing the mesas with sheer cliffs and knowing that they are what’s left after the surrounding land has washed away made me feel very insignificant both in time and space. I am in awe of the majesty of the world in which I live. This has been a wonderful trip of discovery for me. I had hoped to find a Walmart in Lakeview but no such luck. We searched around for a nice restaurant and settled on a restaurant without the nice. The service was so slow I left and ate in the camper in an Elks parking lot. And here we spend the night.
Day 32: Monday: Lakeview, OR to Home: I didn’t see an inviting gas station before I left Lakeview so I checked the mileage and thought I could make it to Klamath Falls with no problem. There were 209 miles since the last fill up and I have made as much as 360 miles without running out and Lakeview to Klamath Falls is only about a hundred miles. Yada, yada, yada! When I noticed that the gauge was below a quarter tank I started to worry that I had once again done something really stupid. Route 140 is not heavily travelled and I doubt there is cell service on most of it. This has been such a blissful trip and here on the last morning of it I’m making myself anxious!. “Here and now, boys, here and now!” It was a beautiful ride even though it snowed on the way from Lakeview. And then there was Bly and a gas station that sold diesel. The station must have been the town’s hang out. There were people standing around inside buying food and eating and talking. The attendant did not seem to be too happy, particularly when I asked for only 10 gallons when I heard the price. She apparently was the cashier, gas jockey, manager and lackey. She was definitely overworked. Lucy and I stopped in a roadside park to throw the ball. It was a nice park for people, or it had been ‘til the geese decided it was nice for geese. I picked up after Lucy but no one picked up after the geese. Coming into the Rogue Valley we were pleased to see Immigrant Lake and to see that it is almost full. We stopped to empty our tanks but were dismayed to see that the dump station was closed. I decided to try the campground for a dump station but found none. I didn’t find the park host either but I did find a regular camper who suggested I pull into an unused campsite and dump there. It worked. Then I stopped to fill the gas tank. Was I surprised to see that Ashland’s price for diesel isn’t much better than the price in Bly! With a full tank I was able to determine that if I had not stopped In Bly I still would have 6 gallons left in the tank when I got to Ashland. Another example of useless worry!
To sum up the trip: It was wonderful! Driving was like a moving meditation. There were few rough spots. I was reminded that I’m not as bright as I sometimes think. I was awed by the beauty of the country. I was blessed with great, good or acceptable weather almost all the time and only stuck in bad weather a few hours. Lucy was a fine travel companion. She sang a lot but it mostly amused me except when I was trying to navigate strange intersections and she and George were giving me confusing or conflicting instructions.
At home, Ashland is in bloom! 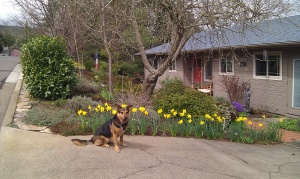 3 Responses to My Sentimental Journey Part 5